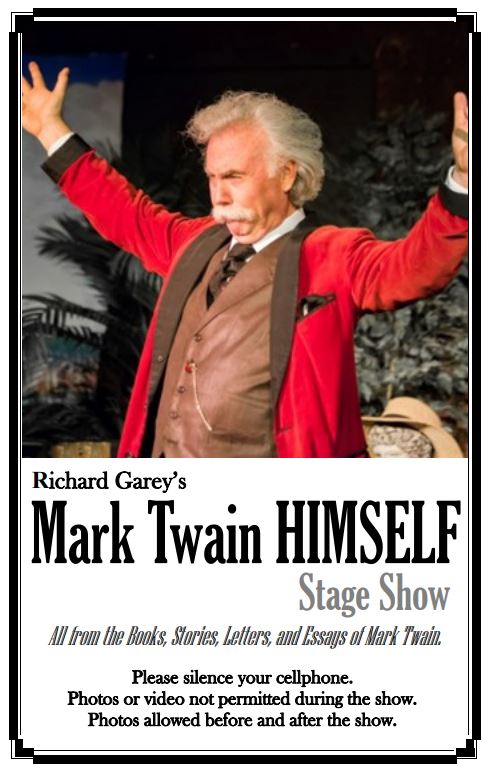 One hundred years ago Mark Twain was the most popular speaker and entertainer in the world.   He traveled the world packing theaters and town halls wherever he went.  The Mark Twain Himself show from Hannibal, Missouri, will entertain at Harmonie Verein at 5333Hackman Road, August, MO, at 6:30 pm.  This acclaimed show celebrates Mark Twain’s humor and wonderful insights into life.  Filled with hilarious comedy and compelling drama, this show includes stage material Mark Twain performed.  Mr. Twain has also announced that he is running for President of the United States.  He may also share some of his political wisdom.

This is an acclaimed stage show that has been performed by Mr. Richard Garey in over 45 states, Canada, and Bermuda.  Mr. Garey is also an entertainer for American Cruise Lines doing Mark Twain Cruises.  Garey has appeared on the CBS Sunday Morning show and All Things Considered.  Garey performs his show each summer in Hannibal’s Planters Barn Theater for tourists and Mark Twain fans who come to Hannibal from all over the world.  With over 30 years of stage credits, Garey works with theaters and venues all over the world to bring Mark Twain back to the stage.

Experience the fun of the famous Mark Twain Shows of 100 years ago.  Through the magic of the stage actor Richard Garey brings Mark Twain to life in Augusta.  Returning Mark Twain to the stage life that he loved, this show captures the man and the legend.  This show is chock full of humor, comedic sketches, irreverent wisdom and biting satire. Combining hilarious comedy and heart-warming drama, this special event is all in Mark Twain’s own words.  It always entertains.